Winning yacht refits were selected from online submissions accepted through the Refit show website at www.refitshow.com during 2016. Any yacht refit professional was able nominate a yacht for a Refit Excellence Award. An independent panel of judges selected the winners based on not only the finished yacht, but on the teamwork, problem-solving and efficiency of everyone involved in the refit, including the boatyard, captain, owner, designer, surveyor and management. The awards ceremony was held during the Refit Show at the Broward County Convention Center and was emceed by Kitty McGowan of the U.S. Superyacht Association.

The award for “Best Poweryacht Refit between 50 and 100 Feet” went to Reel Steel submitted by Jarrett Bay Boatworks. This iconic sportfish was given new life by her owners beginning in November 2015. The owners most notably wanted to reconfigure her cockpit to allow more functionality, as well as add two Seakeeper units. Jarrett Bay created interior spaces and exotic wood veneers throughout, which were also renewed and reconfigured to accommodate significant updates to the salon, galley and three staterooms. The experts at Crystal Coast Interiors and Triton Marine provided consulting and product installations for Reel Steel’s new softgoods, fixtures, lighting and A/V equipment updates. Almost every inch of this world-class 66-foot custom sportfish was reconfigured and/or renewed by Jarrett Bay Boatworks’ team. 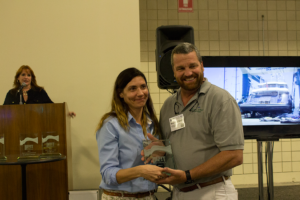 The award for “Best Poweryacht Refit Over 100 Feet” went to SCOUT submitted by Bacchus Yacht Consultancy. SCOUT is a 147-foot motoryacht designed by Ron Holland and built in 2012 by RMK Marine in Turkey. She underwent many upgrades and improvements during yard periods from 2014 through 2016. Most recently SCOUT underwent engineering, deck and cosmetic work at Rybovich in West Palm Beach. The work scope included extensive HVAC upgrades, electrical improvements and modifications to cosmetic rope lighting and associated deck lights and underwater light replacements. The refit team removed the passerelle for a complete overhaul and subsequent reinstallation. There was extensive hydraulic work to PTO components, windlass maintenance, and modifications to main engine exhausts. To achieve the highest quality paint application, the team created a plastic cocoon with a tacky texture to attract stray dust particles and create a clean environment. The entire refit was performed in a shortened time period, totaling 4,600 man-hours over a twelve-week period. 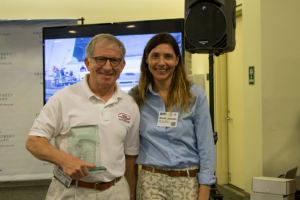 The award for “Best Sailing Yacht Refit” went to SWAN 80-002 submitted by New England Boatworks. This 80-foot Swan was built in 2000. The owner chose New England Boatworks (NEB) to lead a refit last year. NEB teamed with Marine Hydraulic Consultancy (MHC), Van Gorkom Yacht Design and Harken to replace the existing hydraulic system and hardware with a higher capacity, faster, more efficient system. NEB’s role was to provide the necessary structural solutions, rewire the entire yacht, upgrade all mechanical systems and implement MHC’s proposed upgrades. NEB also cosmetically refinished the entire yacht from masthead to the bottom of the keel. The end result provided the customer with systems that rival some of the best new builds, all with the appearance of having always been part of the vessel.

The award for “Best Accomplishment for a Yacht Refit” was presented to one particular standout project where the entire refit team particularly shined. The award went to CUTTIN’ UP submitted by Bluewater Yacht Yard. CUTTIN’ UP is a Viking Yachts 52-foot Convertible originally built in 2005. Over the past few years she was refit by Bluewater Yacht Yard in Hampton, Virginia. What makes this refit so special is the vision and teamwork required to make this boat accessible to an avid angler with a progressive form of muscular dystrophy. Because the disease severely limits his mobility, especially in his legs, the owner has continually refit the boat over the years so that as his disease advances he can still run the vessel himself, fish offshore and access interior spaces without assistance. The latest refit is a master stateroom makeover to allow better motorized chair movement and access to the bed from a seated position. The owner appreciated the ingenuity and quality of work performed on his yacht so much that he also asked Bluewater Yacht Yard to customize his Cadillac Escalade by turning a passenger door into a latching gullwing configuration and installing an articulating chair lift.

The professional crews behind each of the winning refits share in the honor of the Refit Excellence Awards. “Yacht refits are often more complicated than new constructions. The Refit Excellence Awards give the industry the opportunity to honor the people who take on these complex projects and deliver like-new vessels to happy owners,” said Jim Miller, show manager of Refit International Exhibition & Conference and publisher of Professional BoatBuilder magazine.

Nominations for the 2018 Refit Excellence Awards will open late this summer. At that time any yacht refit professional may nominate a yacht for a Refit Excellence Award online atwww.refitshow.com. There is no entry fee, nor limit to the number of entries. Next year’s winners will again be honored at the Refit International Exhibition & Conference, January 10-11, 2018.